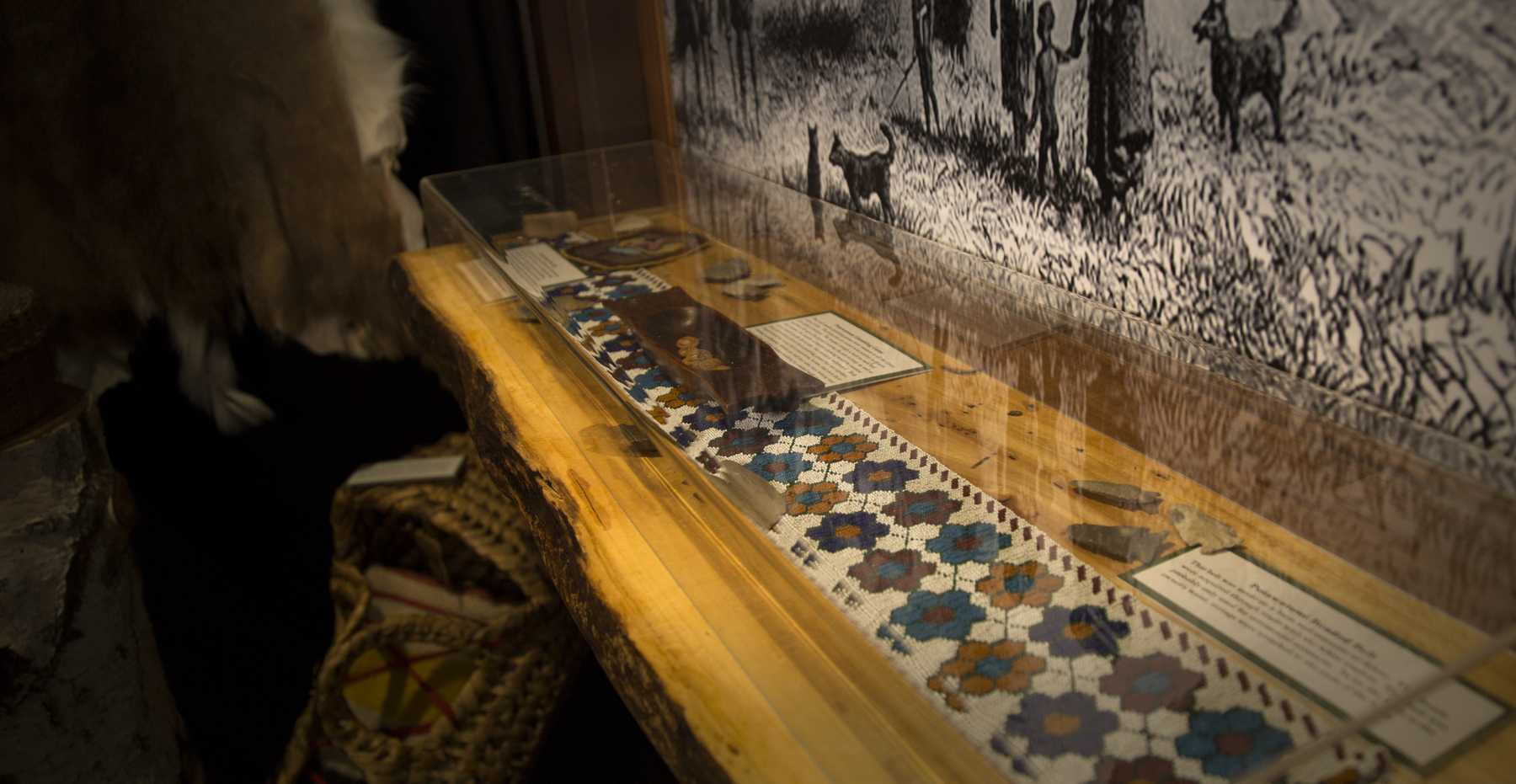 Not only are the Sturgis Historical Museum’s exhibits unique to our area, they are also unique in their ability to meld together a rich history and contemporary technology to create an experience like no other! As we gather and restore additional items, we will periodically change exhibits to continually grow and make each experience at the depot better than the last.

This exhibit pays homage to the Native American tribes that influenced the culture and settlement of Southwest Michigan and the Sturgis Prairie. Using an interactive touch screen, one can explore interesting facts about the tribes and their way of life. Among the Native American artifacts displayed are authentic handmade baskets, a gambling game, a beaded charm bag and a ceremonial belt, a reed baby carrier and a unique holographic arrow head.

Moonlight filters through a large, life-like burr oak tree to reveal smoke from the campsite of a group of soldiers from the 11th Michigan Volunteer Infantry Regiment. Within moments, a ghost-like image appears of Colonel William Stoughton describing the three major battles his heroic 11th Regiment fought for this noble cause.

Our Town Begins to Grow

You can interact with an 1881 map by touching numbers that correspond with buildings which will reveal close-up images and descriptions of the way life was during the latter part of the 19th century in Sturgis.

How Our Town Began

An ornately framed photo of Judge John Sturgis is sure to catch your eye. Watch in wonder as the image begins to move, an eye blinks and the head slowly turns as the Judge begins to speak. He will tell you the story of when and why his family moved to this area and will invite you to meet some of the descendants of his family tree. Notice the change of seasons as you look out the Judge’s window.

The station agent's office has been restored to reflect the original content necessary for a well-functioning station. You can touch the interactive screen for descriptions of the artifacts displayed and send a Morse Code message on the telegraph. Look to your right, Mac, the Station Agent, will appear in the station's mirror. Listen as Mac describes his duties and he will also let you know about the incoming train - just watch out the windows as it arrives and departs.

Don’t forget to look up! An elevated track carries a Model “O” size New York Central train throughout the museum circling the building about every four minutes.

Uniforms, newspaper articles, letters home, activities on the home front and other historical memorabilia are displayed highlighting our Sturgis men and women who answered the call to serve and how we at home supported them. A touch screen with pictures and biographies will honor those who gave the ultimate sacrifice defending our country. This display will highlight each war from the Civil War to the present on a rotating basis.

How did the farming town of Sturgis Prairie, founded in 1828, become an industrial city by 1900? Location, railroads and the ingenuity and ambition of the many entrepreneurs lured to settle here by village leaders offering $4000 to any company who would build a manufacturing establishment in Sturgis and employ 100 or more workers. This exhibit highlights those factories and businesses, and also those carrying on the manufacturing tradition today.

As a symbol of Sturgis’ reputation as The Electric City, Edison-style light bulbs illuminate this 20th century hall. Have a seat and enjoy one of the rotating short films about an important piece of our history.

A large burr oak tree, dating from the 1730s, stood at the corner of U.S. 12 and White School Road and was believed to be one of the oldest trees in St. Joseph County. In 2007, a strong storm toppled the tree and Pat Arseneau, a local master woodworker, salvaged a cross section of the widest part of the trunk to display in our museum. Several important events in our history have been connected to a ring of the tree.

City Services Through The Years

Sturgis city services are highlighted through pictures and displays of our police, fire, hospital, schools and more. “Ring Hazel up” on the old crank telephone, play a homemade Hearts game, check out a model of a horse drawn fire truck, view the up-to-date operating room at Sturgis Hospital in 1925 and much more.

A large, stained glass window hanging near a vintage pump organ dominates this exhibit, but it is more than just glass! Touch one of the panes and a historical synopsis of an area congregation appears. This is an inspirational way to explore the religious heritage of our city.